History of the Catharina

History of the Catharina

Catharina van Mijdrecht
The “Catharina van Mijdrecht” was built in 1916 as one of the last sailing cargo vessels at the Mol shipyard in Dedemsvaart. This Overijssel Klipperaak transported cargo by sail until a Deutz 3-cylinder engine of 57 hp was installed in 1950. This engine lasted until 1996, when it was deemed beyond repair.
For a long time the ship, originally named Carina, sailed around Zwolle carrying mostly sand. When the last skipper had to retire because of old age in 1971, it looked like the end for the Carina as well. For a long time she lay in a canal, awaiting an uncertain future, until she was bought in 1975 and renovations began. Plans for an artist’s studio failed in 1977,  and she was  sold again and renamed Catharina van Mijdrecht. In the following years the conversion and renovations were successfully carried out with close attention to craftsmanship and original appearance, and in 1986 she started her second career as a passenger ship.

Sailing
Dutch sailing has an impressive history; everyone knows stories about the heroic and sometimes cruel exploits of the Dutch across the oceans. But inland navigation, especially on and around the former Zuiderzee, has its own rich history. For centuries, wooden sailing ships were  the principal means of freight transport in the Netherlands. An extensive system of canals, rivers and lakes connected the Zuiderzee to the rest of the country, enabling trade to flourish.

A hard life
A hard and sometimes dangerous life aboard often yielded only a meagre income for the skipper and his (large) family. Thousands of ships sailed these waters and when the winds were unfavourable, the ship would have to be towed. A wealthy skipper could hire a  horse for this, but a poor one would have  to harness his wife and children.

Types of ship
Well-known Dutch ship types like Tjalken, Klippers, Aaken and Botters were developed in many varieties. Each wharf had its own design, with available construction materials and the client’s wishes, but also the sailing area (channel depth and width, length of locks and height of bridges) leading to the final result. When from 1850 onwards  iron and steel were introduced into shipbuilding, the wooden cargo ships slowly but surely disappeared. The sails remained however, because the newly invented steam engines were still much too heavy for the relatively small barges, as were the loads of coal they consumed. Sailing cargo vessels continued to dominate the waters until well into the twentieth century, and they continued to be constructed as such.

Motor vessels
In the 1930s, the “Lame arm” came into vogue, a small diesel engine on the foredeck that propelled a long axis along the side of the ship, with a screw at the end. It was only suitable for short trips, sailing in and out of ports and negotiating narrow waterways in unfavourable winds.  In the 1950s the sails finally disappeared, when heavy-duty diesel engines under the deckhouse made it possible to sail under almost all conditions.

End of an era
Twenty years later however, the ships themselves were also finished; they were simply too small to be profitable for cargo sailing any longer. Modern cargo barges could measure up to 140m long and 22m wide, and overland transport took care of the rest. Many of the old ships were scrapped and melted down, and others were converted into houseboats.

Scrap metal and new beginnings
Some people at that time were  aware that this was an essential part of our nautical history being lost. They purchased the rusty old iron hulls, often at scrap metal prices, and started working. Knowledge of sailing and shipbuilding had to be rediscovered through old books and photographs, but mainly through interviews with retired skippers who had experienced it all.
Besides time, these restorations took a lot of money. To solve this problem, restorers regularly organized trips for friends, family, acquaintances, etc., who would pay for a bit of sailing. This has developed into an industry that currently keeps some 500 traditional sailing ships afloat in the Netherlands, sailing around 200,000 tourists yearly and directly employing 1,500 people. 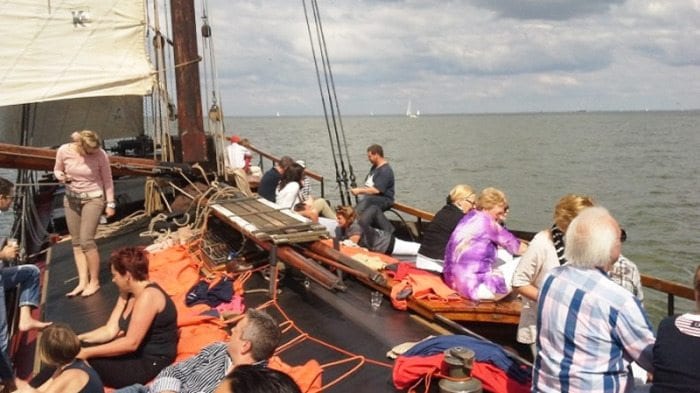 Weekend sailing half board 2d2n 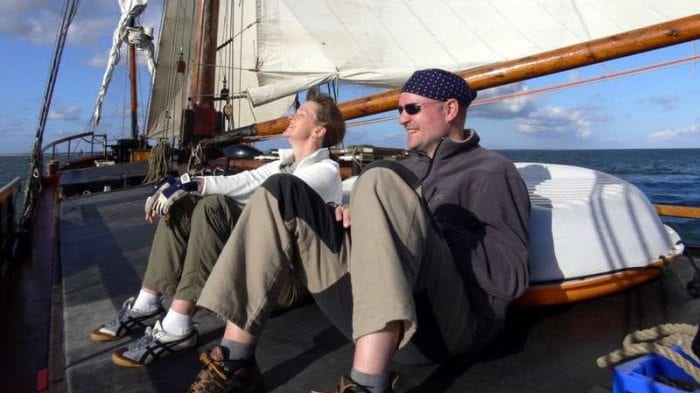 Weekend sailing half board 2d 1n 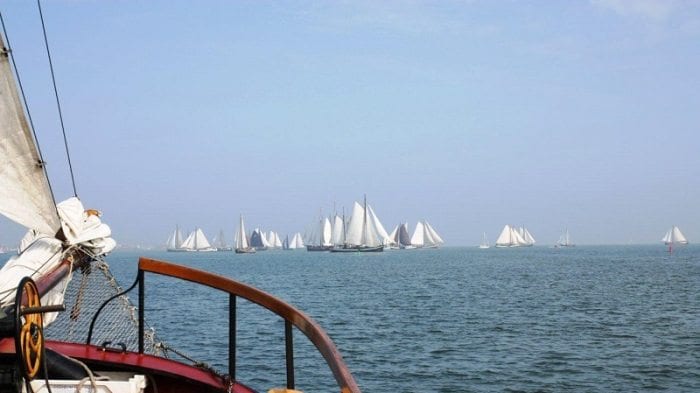